Chef Joseph Maina is the senior sous chef at Nairobi Safari Club, and he recently won first place in the International Category of the first ever Supreme Chefs 254 Challenge. He is pleasant and lively and his laughter warms up a room. As a chef, he has cooked and sampled tons of meals from different cuisines, but he swears by Mbuzi choma above all other foods. Fundamentally, Chef Joseph is a simple man who loves water and makes amazing steaks.

When Chef Joseph speaks about Mbuzi Choma (roasted goat meat) and Kachumbari, he speaks with such fondness that his face lights up. Understandably, his specialty is steaks, but he is an all-round chef and can whip up a range of pastries and desserts, and knows his way around Kenyan, Italian, Thai and Indian foods/cuisines. He describes his taste in music as eclectic, a quality that trickles down to his cooking. He is creative in the kitchen, and his meals are full of flavour, and pleasing to the senses.

We spent an afternoon with Chef Joseph at the Safari restaurant, talking about all kind of things; from his love for Mbuzi Choma to his best and worst moments as a chef and ultimately, his award at the Supreme Chef’s Challenge. Read on to see some of the foods he served us. 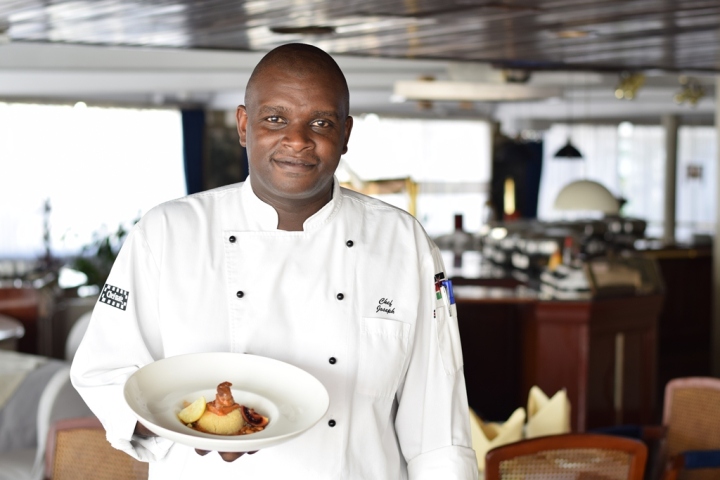 Growing up, while other kids wanted to be pilots or doctors, Chef Joseph wanted to be a business man, just like his parents. He had a natural love for the kitchen and would cook a lot at home, but he only joined culinary school after first pursuing business management in college. His chef journey began at Gracia Resort in Hurlingham where he rose from a cook to an assistant to the executive chef, and he has never looked back since. He sees his future in the business of food.

Chef Joseph has worked in leading hotels in Nairobi and Mombasa, including Sankara Nairobi, Sarova Whitesands and Sarova Panafric where he worked with Chef Festus, who he speaks so highly about. He also worked as an executive Chef at Pumula restaurant, and has had short stints at Tribe Hotel, the Red Court, Savannah coffee house and Mawenzi gardens.

Chef Joseph got to know about the Supreme Chefs Competition through the Executive Chef at his current job at the Nairobi Safari Club. He registered and went for the competition at the Sheffield on Mombasa road and after a series of challenges, he came up in the top two and went on to win first place. The challenge had 3 judges from different fields and an international judge from South Africa, and the contestants had limited time to prepare dishes using ingredients from a mystery basket.

He was quite confident going in to the competition, and I was curious to know if he saw the win coming. He admitted that the maize flour in the mystery basket in the final round threw him off, and it wasn’t until he tasted the final dish when plating that he knew he had a chance. He served Teriyaki seared salmon with maize flour and chicken ravioli, strawberry foam and strawberry onion marmalade. The judges loved it and agreed that he had used more technique and worked better with the mystery ingredients. The blend of the elements was amazing,  even though the maize flour ravioli was a bit dry. Looking back, would he have done things differently? Of course he would, especially with the maize flour, but what he did then won him the award, so it’s all good.

Winning the Supreme Chefs Challenge came with a trip to South Africa, where Chef Joseph got to work in leading hotels including the Sandton Convention Centre, Sandton Sun and the Intercontinental Sandton.  The exposure gave him more resolve to improving the standards of culinary trade in Kenya and he speaks so passionately about the need to unite the chefs in Kenya, as they are in South Africa, through the South Africa Chefs Association. Top on his list as one of the Supreme Chef 254 ambassadors is to bring chefs together so they can spur positive change in the industry as a unit, and he calls on all chefs to register as members.

Chef Joseph’s dream kitchen would have plenty of garlic and black pepper (roasted black pepper corns which are then ground, not the processed powder). He loves the aroma that fills the kitchen when fresh garlic is fried gently on a pan until it browns. The aroma, he says, makes the kitchen feel like a bakery, but for garlic. 😊

As you already know Mbuzi Choma with Kachumbari is his favorite meal and water is his favorite drink. He particularly enjoys sparking lime water and has acquired a taste for green tea, which he enjoys neat.

Memorable moments as a chef

Chef Joseph has had plenty of great reviews in his years as a chef, but there’s one he got while working at the Sarova Panafric that has stayed with him all this time. The guest was staying at the hotel and would occasionally interact with the chef during breakfast. The chef was not around on the day he checked out, so he turned to Trip Advisor to pass his appreciation. The review was heartfelt and lengthy and appreciative and its genuineness left a mark.

In another establishment, he recalls a diner who ordered steak and kept sending it back after the first bite. He said it was overdone, then tough, and the next, he said was under seasoned, and he was the only one in the group who had a problem. After the third steak was brought back, Chef Joseph went out to meet the diner to ask how he would meet his expectations, because the steaks just weren’t working for him. He asked for chocolate ice cream that day, but went on to come to the restaurant every week, and asked to have his meals prepared by Chef Joseph. He was a difficult client to please the first time, but he muses at how 3 bad steaks cemented a solid friendship and clientele.

Chef Joseph has also had clients who come with requests for specific portion sizes – say 80 grams chicken breast, 20 grams of rice and 20 grams of vegetables, and it is definitely harder to forget such  unique results.

What Chef Joseph served us

During our interview, Chef Joseph set before us a couple of dishes which were amazing.

The first starter was Chilled Mango, Cashewnut and Prawn cocktail salad, which was served in a whiskey glass with cucumber as a base. It comprised of seared Prawn dressed with lime and black pepper, Mayonnaise, ketchup, chilli, cashew nuts and mango, which was a creative use of the fruit in season. This salad was crunchy and flavourful, and you could taste a bit of sweetness, a bit of spice  and a bit of sourness. It made the taste buds come alive.

We also sampled a warm starter; the Lamb, olive and bean stew casserole with apple couscous, prickles, tree tomato and lime. I loved this one even better and the elements blended so well. 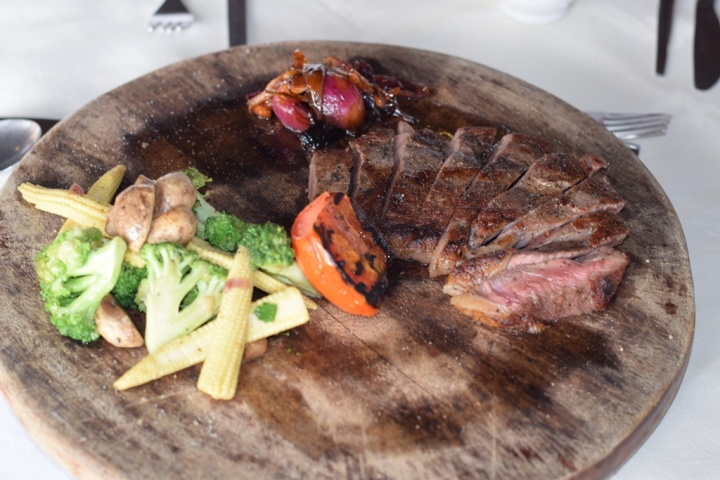 For the main course, we had grass fed Sirloin Steak, smoked onion jam, gently poached bourbon tomatoes and broccoli and corn dance. The steak was Amazing! It was tender and juicy and seasoned so perfectly; typically everything you would want in a steak. Just going by that steak, I really cannot wait for the steak house to open! 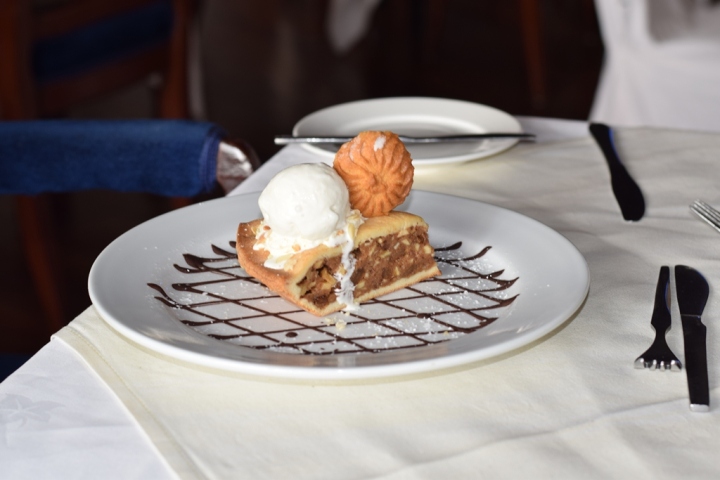 The dessert served was Rich Granny’s Apple pie with almond ice cream. I loved the ice cream with almonds, and the Apple pie lovers in our midst enjoyed theirs too.I enjoy cakes more than I do pies, but the apple pie was good.

The Art of Plating

One of the things I love about A la Carte menus versus buffet, is that you get to see chefs’ creativity and presentation skills come alive on your plate. Plating is an art, and I sought to know what’s the one rule Chef Joseph lives by when plating.  The rule of odd numbers, he said. He considers shapes and colours and thinks through presentations, even practices a couple of times each week, but he’s more likely to use an odd number of items on a plate versus even numbers.

Chef Joseph’s  parting shot was simiple; that Chefs need to come together and bring positive changes to the industry as a unit. He also emphasized on the need to respect everyone’s contribution in the kitchen setting; no one is too learned that they can’t learn something new even from the younger chefs. Ultimately, everyone needs to take time to learn and practice, to constantly put in the work and to strive to better themselves. Oh, and do check out Supreme Chefs 254 on Facebook.
My parting shot?

I cannot wait for the steak house to open, because amazing sirloin steaks aren’t easy to find! If you’d like to sample his steaks sooner, go to Nairobi Safari Club on University way, and ask for him.

*This article was first published on hapakenya.com

Please spare a minute and respond to this survey